The common technique for controlling throughput of an axial compressor is to incorporate variable inlet guide vanes for the first few rows of blades. Some manufacturers can vary all the inlet guide vanes. This method is more efficient than using a suction throttle valve. Due to the very high flow rates of axial compressors, a suction throttle valve would need to be 2 meters or more in diameter and would impose extreme lengths of inlet piping to assure clean streamlines for the inlet flow.

The conventional technique of predicting the surge line by comparing the discharge pressure to the differential pressure across the compressor suction bell is not adequate for an axial compressor if the inlet guide vanes are not fixed. This added variable must be accommodated in order to accurately predict the location of the compressor surge line. 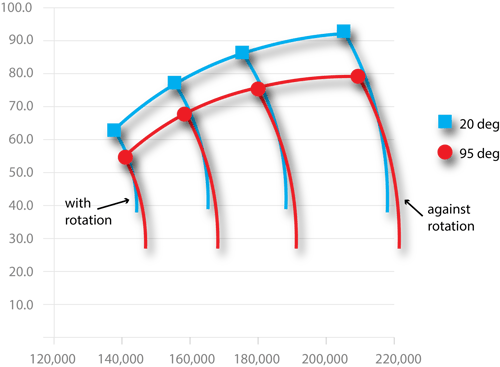 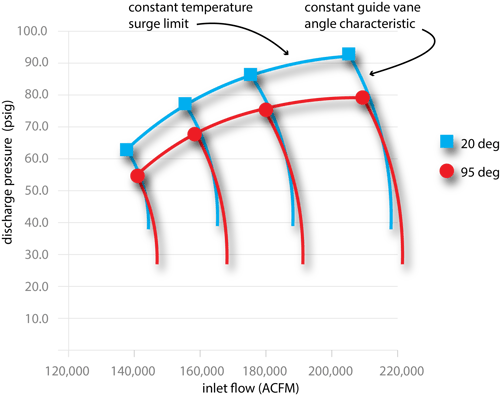 Figure 3 –Since the head‐capacity characteristic changes with different inlet guide vane angles, the tradition technique of predicting the surge line using discharge pressure and flow is inadequate for this type of compressor.

An alternate technique for predicting the surge line for an air compressor with variable inlet guide vanes is to modify the surge line based on the suction temperature. Effectively, the multiple inlet temperature performance maps provided by the compressor manufacturer are modeled in the compressor control program. The inlet
temperature is measured and an interpolation is performed to calculate the location of the surge line. For a clean compressor, this technique closely follows the results yielded by the guide vane position algorithm. The primary disadvantage of this method is that it requires a little more safety margin to protect the machine as the blades become fouled. A comparison alarm can be included based on the guide vane angle to alert the operator when there is significant deviation between the two algorithms.

The primary benefit of the temperature compensated prediction algorithm is that it relies on conventional instrumentation. Maintenance of a temperature transmitter is much simpler for plant personnel and redundancy schemes are also possible (and recommended for critical machines).

About once every two weeks, we'll discuss a turbomachinery controls topic that we were either asked about recently or a topic that we think you might be interested in learning more about.