This will be the first of two posts discussing:

In the hydrocarbon processing industry, refrigeration systems are widely used to achieve various process objectives. One objective is to promote the separation of cryogenic gases such as ethane and ethylene. Another application is to condense a gas in order to make it easier to transport. Most refrigeration systems have a few things in common: a condenser, a compressor and evaporators. To improve the thermodynamic efficiency of the refrigeration process, the cooling is done is steps with multiple evaporators. Each of the evaporators operates at a
different pressure, which requires a special compressor.

The final stage discharge is piped to a condenser where heat is removed to cause the gas to change phase to a liquid. The liquid flows to a holding vessel called the accumulator. The discharge pressure of the compressor is a function of the temperature of the condenser cooling medium. The higher the cooling temperature, the high the pressure at which the gas will condense. The liquid in the accumulator is at approximately the same pressure as the
compressor discharge and warm (slightly warmer than the condenser cooling medium).

As the warm product passes through the tubes, heat passes from the warmer product into the cooler refrigerant. This cools the product, but in the process, causes some of the refrigerant to boil off. The vapors formed by this cooling are drawn away from the chiller by the respective suction of the compressor. A liquid level controller maintains the liquid level by admitting liquid refrigerant from the accumulator for the HP chiller, from the HP chiller for the MP chiller and from the MP chiller for the LP chiller.

Process Control
The most important process parameter in refrigeration systems is usually the refrigerant temperature in the LP Chiller. Since the liquid in the chiller is saturated, the temperature is a function of the vapor pressure. Most refrigeration systems only attempt to control the pressure of the low pressure chiller, allowing the other sidestream pressures to float based on the process load. For variable speed applications (turbines), the suction pressure is regulated by adjusting the speed. For fixed speed applications, the pressure of the LP chiller is controlled by modulating a control valve that is located in the vapor line between the chiller and the compressor suction nozzle.

Anti-surge control schemes all relate the surge line to the suction flow of each compressor section. The side-stream type of refrigeration compressor usually has a flow meter on the suction stream and on each side-stream. The flows into the sections that are fed by a sidestream require a special algorithm to calculate the total flow to that stage. Since the flow used by a surge controller is volumetric, the algorithm must calculate the discharge temperature of the previous stage and do a mass weighted temperature calculation for the mixed temperature
of the gas entering the stages with side-streams. 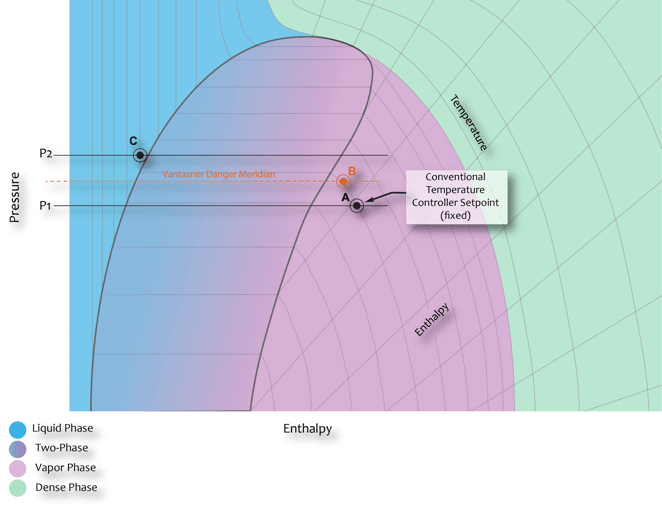 Traditionally, refrigeration systems take “hot” discharge gas through a recycle control valve back to the suction and side streams to satisfy the minimum volume flow demands of the compressor sections. A liquid quench line provides cooling for this gas in order to maintain the suction temperature (and pressure). Figure 1 is a schematic of a typical system.

The liquid quench flows are regulated by a temperature controller referencing the compressor suction or side-stream temperature. As long as the gas pressure remains within a narrow range, the controller will provide adequate temperature regulation.

Things can go wrong when recycle valve(s) are open...

When there's a process upset where load is lost, the compressor moves towards the surge line, which can cause the recycle valve to open which in turn adds quench flow. The added flow has the knockdown effect of increasing recycle mass flow which, because of responsive surge controller tuning, will tend to amplify process swings.

When the gas pressure rises to the point that the temperature controller setpoint is less than the saturation temperature (at that pressure), the controller will open the quench valve fully, even though that amount of liquid is not required for controlling the gas temperature. This situation can result in excessive liquid refrigerant consumption, high suction drum liquid levels and liquid carry-over into the compressor.

Figure 2 shows a typical pressure-enthalpy diagram for a single component refrigerant. Point A is the intersection of the gas pressure (P1) and the temperature controller setpoint temperature line. Point B defines the Vantasner Danger Meridian for operators, where once exceeded, things can go very wrong, very quickly. The intersection of P2 and the temperature controller setpoint is Point C, which is in the sub-cooled liquid section of the diagram. Since this vapor temperature cannot be achieved, the controller will open the quench valve fully (a deleterious operating condition which will be very difficult to recover from).

In part two of this post we will discuss how we can improve on the traditional quench control by integrating decoupling, feed-forward,  and enthalpy calculations into the controls - we'll see you in two weeks.