Proper selection of the recycle valves for a refrigeration compressor can be significantly more complicated than the selection valves for most other anti-surge applications. Refrigeration Compressors that have a liquid quench stream for recycle cooling present significant complications for the selection of the recycle valves. The design of the liquid quench system is important for ensuring stable operation of the compressor when the process loads are low.

The following equations show parameters that affect the differential head:

When the operating point approaches the surge limit, the anti-surge controller will start opening the recycle valve. The gas that is recycled will replace the vapor that is no longer coming from the evaporator. The addition of this vapor will stop the pressure ratio from dropping further. But, since the temperature of the recycle gas is not cold, the density of the inlet gas will be lower, which causes the differential head across the compressor to increase. This increase in head will push the operating point towards the surge limit, leading to a further increase in the output of the anti-surge controller. For low recycle flows (when there is still a significant amount of cold vapor coming from the evaporator), no cooling is required for the anti-surge recycle flow. But as the recycle flow increases, there is a point where the increase in temperature of the inlet will no longer be balanced by the cold vapor.

When a refrigeration compressor is in full recycle, the amount of cooling liquid that must be added to the recycle stream to prevent a significant rise in the inlet temperature is substantial. Depending on the refrigerant and the pressure ratio across the compressor, the liquid flow during full recycle (no vapor contribution from the evaporator) can be as much as 40% of the total mass flow to the compressor.

For refrigeration compressors, there are two operating scenarios that have the most significant effect on the sizing of the vapor recycle valve; startup and trip. In general, if the  valve is adequate for these two operating condition, it will be large enough for any other conditions.

It is a common for the plant operators to prohibit the use of the liquid quench during a trip in order to avoid the risk of liquid carry-over into the compressor. Without any liquid contribution to the recycle, the entire flow required by the compressor to avoid surge must be provided by the vapor recycle valve.

Additionally, without cooling, the amount of vapor required to prevent surge is significantly increased due to the effect of inlet temperature on the differential head.

Accurate and fast valve positioning is important for any anti-surge valve application. Generally, a valve that strokes from closed to fully open in less than two seconds will be adequate. An accurate positioner with a volume positioner should be included with the actuator. Minimal hysteresis is important for preventing control instabilties.

The liquid that is added to the recycle vapor stream for cooling is a significant contributor to the prevention of surge. The mass flow contribution by the liquid recycle can be as much as 40% of the total recycle flow. While the flow from the vapor recycle has a more significant impact on reducing the pressure ratio across the compressor, the liquid recycle (due to the cooling) has a more significant impact on limiting the differential head imposed on the compressor. Without adequate liquid flow into the recycle stream, the prevention of surge and ultimately, the stability of the process can be difficult to ensure.

There are several problems with the operation of the liquid recycle that cause operators to distrust the temperature controller and limit its use. These problems are primarily associated with the management of suction drum levels.

The first section suction drum is normally operated with no liquid (dry). Since the normal suction pressure on refrigeration compressors is low, it is difficult to remove any liquid that might accumulate in the drum. At low pressure, it is difficult to pump the refrigerant out because the liquid will tend to flash in the suction of the pump. If there is excessive liquid flow for the quench or the liquid does not fully flash, liquid will begin to accumulate in the drum.

Sizing the quench valve is not difficult. Essentially, the enthalpy contributed by the hot recycle gas must be removed by the flashing of the quench liquid. This will define the mass flow requirements for the valve. The differential pressure is set by the suction and discharge pressures and the pressure drop across the spray nozzle. Selecting the correct valve is more difficult. Since the pressure of the liquid that enters the valve is only slightly higher than the saturation pressure of the liquid, flashing across the valve will be inevitable. Cavitation will be very difficult to avoid.

It is common for the quench valve to eventually develop leakage problems due to cavitation damage of the seat and plug. Leakage will eventually cause a liquid level to develop in the suction drum. When the leakage becomes signficant, the operator will block-in the quench valve to prevent the drum level problem. Now, if an upset occurs in the process that requires significant recycle, the operator must un-block the liquid valve as quickly as possible to prevent the compressor from taking itself offline and tripping. 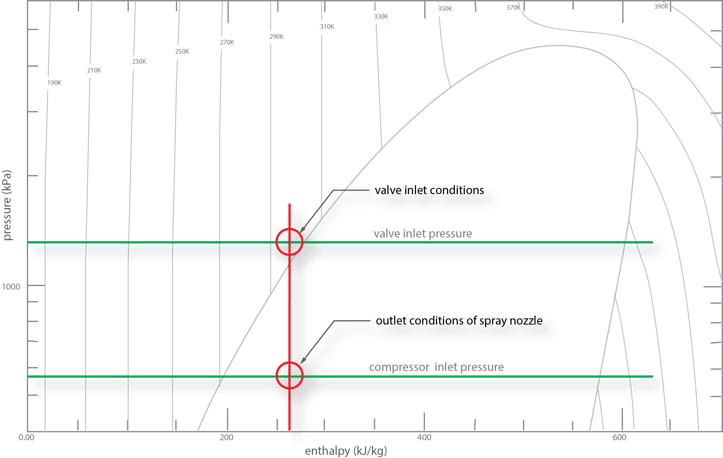 Figure 2: The liquid that enters the temperature control valve is only slightly subcooled. With only a small drop in the pressure of the liquid, flashing will begin to occur. If the majority of the pressure drop can be performed by the liquid spray nozzle, the cavitation damage to the valve can be minimized

As with the vapor recycle valve, the liquid valve actuator should include an accurate positioner with a volume booster. Low hysteresis is important for this valve. If the valve cannot smoothly manage the cooling liquid flow, swings will result in the operating point. Eventually, the operator will put the temperature controller in manual to stop the swings. Unlike the liquid valve, there is no need for fast actuation in this service.

The spray nozzle selection can be the most important function to ensure a successful anti-surge installation. If the nozzle is not selected correctly, the performance of the quench system will be inadequate, especially at low flows. If the spray nozzle is ineffective at atomizing the quench liquid, the contact with the hot vapor will be inadequate. Inadequate contact will mean insufficient cooling and incomplete evaporation of the liquid. The result will be poor cooling and an accumulation of liquid in the suction drum. And ultimately, the operators will lose confidence in the quench system.

There are companies such as IMI-CCI that have experience producing attemperators for steam systems that can also be used for quench service in refrigeration systems. These devices integrate the valve, actuator and spray nozzle into a single assembly. The valve is designed to tolerate the phase change that is inevitable with high vapor pressure liquids and the nozzle is designed to atomize the liquid over a large flow range.