Protecting the Compressor and the Process

Properly designed compressor controls should not only protect
the compressor, they should protect the process.

Centrifugal compressors are common-place in many process plants due to their small
footprint, lower installation cost and low maintenance cost, relative to positive displacement
compressors.

One significant shortcoming of a centrifugal compressor is its need for surge protection.

Centrifugal compressors raise the pressure of a gas by accelerating the gas in an impeller,
then, by Bernoulli’s principle, slowing the gas down in the diffuser section to convert the
velocity energy into pressure energy. The velocity energy that is imparted to the gas is a
function of the density of the gas and tangential velocity (tip speed) of the impeller.
Therefore, with a given gas and impeller speed, there is a finite pressure ratio
(discharge pressure vs. suction pressure) that can be supported by a centrifugal compressor. 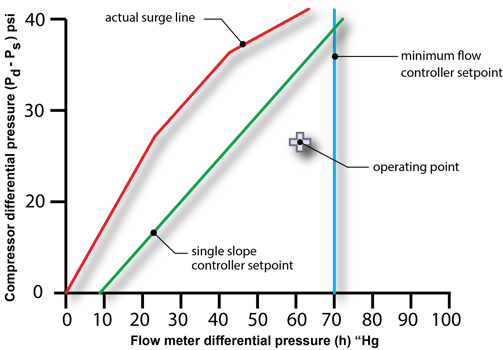 The earliest implementation of surge control based on surge line prediction that was
invariant to gas conditions was introduced by the Foxboro® Company in the mid-sixties.
Using a single loop pneumatic controller, the surge line was characterized according to
a ΔP vs. h algorithm where ΔP was the differential pressure across the compressor
stage and h was the differential pressure across the suction flow meter. This technique
pioneered by the Foxboro Company was the industry standard for a couple of decades
and as long as the suction pressure was fairly constant, this algorithm and hardware
setup was quite effective for compressor protection allowing significantly better
turndown than was available from a simple minimum flow controller.

The advent of digital anti-surge systems
In the eighties, with the growing popularity of digital controls, other manufactures
introduced digital surge controllers. These controllers used the same algorithm as the
one pioneered by the Foxboro Company twenty years earlier. These new digital controls
used a sloped line that defined the surge line and characterized ΔPc (compressor
differential pressure) to the Y-axis and ΔPo (orifice differential pressure) to the X-axis.
As with the earlier Foxboro pneumatic solution, the digital version worked fine as long
as the suction pressure did not deviate significantly from the design pressure that was
the basis for the surge curve configured in the controller.

These digital anti-surge controllers were quite successful in the eighties and nineties
because they allowed significantly greater turndown without recycling and were good at
protecting the compressor against surge. A major complaint about these systems was
the abruptness with which they would take action to protect the compressor.
Since an anti-surge controller is usually not actively controlling (when the flow is well to
the right of the surge line), the controller will be wound down until the operating point
approaches the setpoint of the surge controller. The tuning parameters that are
appropriate for this type of controller tend to be “soft,” which leads to a controller that is
slow to react. And since flow signals are noisy, the derivative term of the PID can’t be
used. All these issues result in a protective controller that is slow to react and ultimately
over-reaction when the controller error is severe.

When an upset occurs in a process plant that causes the flow to drop suddenly or the
pressure ratio to rise quickly, these digital anti-surge controllers will open the anti-surge
valve(s) suddenly in order to prevent surge of the compressor. This protects the
compressor, but can create disruptions to the process that are severe enough to trip the
process unit. Some processes can experience damage to process equipment during
such events.

In general, there are very few process changes (aside from the closing of a block valve)
that will drive a compressor into surge at a rate that cannot be gracefully managed by
the surge controller. But a quick drop in speed will send the operating point into the
surge line very quickly.

Protecting the process
Ultimately, the process needs the compressor to always provide a pressure and flow
that matches the demand of the process. A properly integrated compressor control
system not only integrates the performance control and surge control, it incorporates
other control features to soften or eliminate interactions and abrupt controller actions.

Surge anticipation
Algorithms that can anticipate surge or that limit the rate at which the operating point is
allowed to drop can provide the performance controller a way of limiting the demand
that is placed on the surge controller in the first place. To effectively manage the
process demand, this type of feature works best when it is integrated with a
performance controller decoupling feature. The use of this feature will not only reduce
the demand on the surge controller, it will significantly soften the effect of the
compressor control system actions on the process.

Digital controls have provided intelligent protection systems for the problem of
compressor surge that can improve the operating efficiency of the unit. But if the
additional features are not incorporated that provide protection to the process, the gains
in efficiency will be offset by the process disruptions. And worse yet, if the disruptions
cause the operators to distrust the anti-surge system, they are more likely to defeat the
system altogether.

Integration of the compressor performance controls with the anti-surge controls along
with incorporation of good compressor control features will allow the benefits of
improved compressor protection to be realized without sacrificing the smooth operation
of the process.