years, there has been an associated proliferation of promises and myths about the

What is surge margin?

surge line. This definition requires some additional qualifiers in order to make it useful

as a comparison criterion for the control system performance. The compressor

section (or stage). The performance map is a useful device for relating the anti-surge

system performance to the compressor operation.

How is the margin calculated?

surge line at the same pressure ratio by the total flow scale. The minimum control line is

based on the same technique. Therefore, if the minimum control line is set at 10%, when

(on a constant pressure ratio basis) as compared to the full range of the flow scale. If the surge

flow at this pressure ratio is 30%, for example, then the surge margin relative to the compressor

use a constant offset. A proportional offset can be used as well that has the effect of

the surge line flow. The proportional approach is appropriate for use on in applications

that have a widely varying molecular weight. Whether or not to use this technique

should be decided during the execution of the control projects. 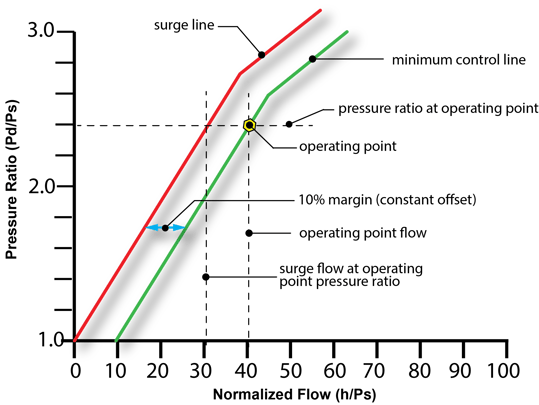 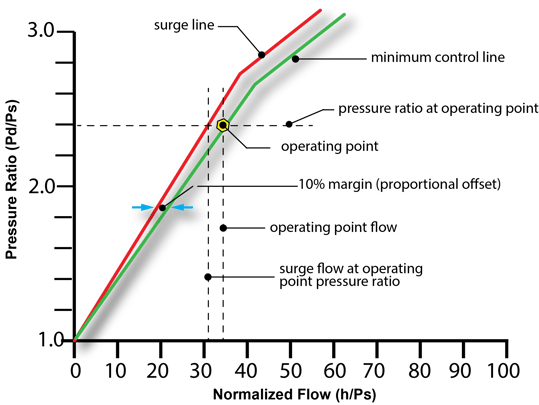 How much margin is appropriate?

proportional margin), the amount of margin required for a particular installation depends

on a number of factors. The amount of margin required to protect the compressor is not

necessarily the same as the amount of margin required to protect the process. A simple

analogy is highway traffic. How closely can you follow the car in front? The more

distance you leave between you and the car in front, the more time you have to react

and the less abruptly you will need to react. But in heavy traffic, it you leave too much

room, other cars will cut in front of you. You have to make the decision based on

In a compressor installation, the most significant parameter that will affect the

appropriate margin is the sizing and reaction time of the anti-surge valve. If the valve is

inadequately sized or opens too slowly, a wider margin will be required to prevent

surge. Even if the valve is adequately sized, the impact on the process needs to be

considered. If the minimum margin is small, the valve will have to open more abruptly to

For processes that routinely operate near the minimum control line, a wider margin will

tend to waste power. The process dynamics as dictated by piping lengths, valve

locations, vessel and piping volumes and mechanical equipment is a big influence on

the required margin that must be considered.

How is the minimum margin determined?

Traditionally, trial and error was the most common technique for finding the required

margin. For installations that routinely operate far away from surge, a conservative

margin is chosen (10% of the full flow scale). The only time the anti-surge controller is

active is during startups, shutdowns and significant load drops. But compressors that

routinely operate near the minimum control line will benefit from a tighter margin, if the

system can tolerate it. In the past, about the only way to evaluate the minimum margin

requirement was to test the control system on the live process. Over time, if the

protection proved to be inadequate or if the process disruptions were too severe, the

margin would be increased.

In the last few years, the availability of rigorous, high fidelity dynamic simulation

even installed. This software can be connected directly to the project control system

software, allowing the actual project software to be tested rather than just a simulation

of the control software.

Other influences on margin selection

the compressor and the process. Other features that need to be included are

response. And of course the experience and qualification of the engineering staff that